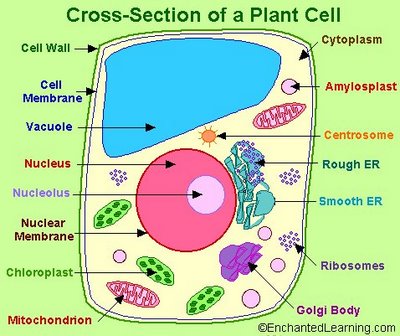 The smallest unit of living matter that can exist by itself is the cell. Some organisms, such as bacteria, consist of only a single cell. Others, such as humans and oak trees, are composed of many billions of cells.

Cells exist in a variety of shapes and sizes. Red blood cells are disk-shaped, while some skin cells resemble cubes. A single cell could be as large as a tennis ball or so small that thousands would fit on the period at the end of this sentence. Regardless of size, however, every cell contains the components needed to maintain life. Cells normally function with great efficiency, though they are vulnerable to disease. (See also cancer; disease, human; virus.)

Cell size is usually measured in microns. A micron is equal to about one millionth of a meter, and about 25,000 microns equal 1 inch. The smallest bacteria are about 0.2 micron in diameter. The diameter of the average human cell is roughly 10 microns, making it barely visible without a microscope.

The study of cells comprises the branch of biology called cytology, and the scientists who specialize in this field are called cytologists. A related field is molecular biology, which examines large molecules such as nucleic acids and proteins and their roles in cell structure and function.