Resources for The Great Gatsby by F. Scott Fitzgerald

"Show me a hero and I'll write you a tragedy." 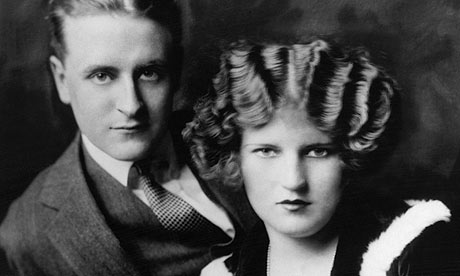 F. Scott Fitzgerald and his wife Zelda
(image from The Guardian.com)

Fitzgerald, F. Scott (1896-1940), was the leading writer of America's Jazz Age, the Roaring Twenties, and one of its glittering heroes. The chief quality of Fitzgerald's talent was his ability to be both a leading participant in the high life he described, and a detached observer of it. Few readers saw the serious side of Fitzgerald, and he was not generally recognized as a gifted writer during his lifetime. While he lived, most readers considered his stories a chronicle and even a celebration of moral decline. But later readers realized that Fitzgerald's works have a deeper moral theme.

Francis Scott Key Fitzgerald was born in St. Paul, Minnesota, on Sept. 24, 1896. He attended Princeton University, where he wrote amateur musical comedies. He left Princeton in 1917 without a degree. Years later, Fitzgerald remarked that perhaps he should have continued writing musicals, but he said, "I am too much a moralist at heart, and really want to preach at people in some acceptable form, rather than entertain them."

Fitzgerald won fame and fortune for his first novel, This Side of Paradise (1920). It is an immature work but was the first novel to anticipate the pleasure-seeking generation of the Roaring Twenties. A similar novel, The Beautiful and Damned (1921), and two collections of short stories, Flappers and Philosophers (1920) and Tales of the Jazz Age (1922), increased his popularity.

The Great Gatsby (1925) was less popular than Fitzgerald's early works, but it was his masterpiece and the first of three successive novels that give him lasting literary importance. The lively yet deeply moral novel centers around Jay Gatsby, a wealthy bootlegger. It presents a penetrating criticism of the moral emptiness Fitzgerald saw in wealthy American society of the 1920's.

Fitzgerald's next novel, Tender Is the Night (1934, revised edition by Malcolm Cowley, 1951), is a beautifully written but disjointed account of the general decline of a few glamorous Americans in Europe. The book failed because readers during the Great Depression of the 1930's were not interested in Jazz Age "parties." Fitzgerald died before he completed The Last Tycoon (1941), a novel about Hollywood life.

Critics generally agree that Fitzgerald's early success damaged his personal life and marred his literary production. This success led to extravagant living and a need for a large income. It probably contributed to Fitzgerald's alcoholism and the mental breakdown of his wife, Zelda. The success also probably led to his physical and spiritual collapse, which he described frankly in the long essay The Crack-Up (1936). Fitzgerald spent his last years as a scriptwriter in Hollywood and died there on Dec. 21, 1940. A few years after his death, his books won him the recognition he had desired while alive.