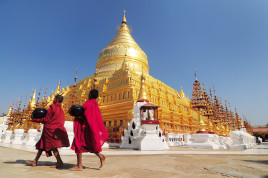 Buddhism is one of the world’s major religions. It was founded in India about 500 B.C., or shortly afterward, by a teacher called the Buddha. At various times, Buddhism has been a dominant religious, cultural, and social force in most of Asia. Today, Buddhism has about 350 million followers. Most live in Tibet and other regions of China, and in Japan, the Korean Peninsula, Sri Lanka, and mainland Southeast Asia.

All Buddhists take refuge—that is, seek comfort, guidance, and security—in (1) Buddha; (2) his teachings, called the dharma; and (3) the religious community he founded, called the sangha. These elements of Buddhism are known as the Three Refuges or Three Jewels.

Buddha is a title given to a person believed to have transcended the cycle of rebirth known as samsara and attained nirvana (enlightenment). The first Buddha and founder of Buddhism was Siddhartha Gautama, born in the 500’s or 400’s B.C. in Nepal. Buddhist accounts tell that he was born a prince.
As a young man, after providing for his wife and young son, Gautama resolved to leave his family and palace life to seek spiritual liberation as a wandering ascetic (a person who denies himself worldly comforts and pleasures). After traveling throughout northeastern India for six years, Gautama experienced nirvana and discovered the Four Noble Truths. These central teachings state that (1) suffering is part of life; (2) there are causes of suffering, like emotional attachment, ignorance, and selfishness; (3) there is a state of transcendence of suffering; and (4) there is a path that leads to that state. Eventually, Gautama decided to teach his message and founded a community of followers. After others learned of his discovery, they called him the Buddha, which means Enlightened One.